The trip destination is in the arms of His Majesty the former emperor !?

Sumire Nozaki is a little bit awkward for a high school student, but the truth is that she's just bad at relationships. Suddenly, a fire occurred and she was engulfed in a huge explosion! All of a sudden, she appears in front of a good-looking man with silver hair and purple eyes! And he's none other than Gladitoria's former emperor?! Furthermore, he is served by mysterious sentient ivy. A love story revolving around the two of them in a gentle fantasy world! 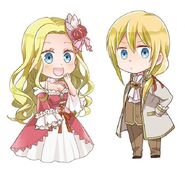