The Power of the Saint is All Around

The Power of the Saint is All Around

7 volumes already published (as of December 2021)

The Power of the Saint is All Around / The Saint's Magic Power Is Omnipotent (聖女の魔力は万能です, Seijo no Maryoku wa Bannou desu) is a Japanese light novel series written by Yuka Tachibana and illustrated by Yasuyuki Syuri. It began serialization online in 2016 on the user-generated novel publishing website Shōsetsuka ni Narō. It was later acquired by Fujimi Shobo, who have published eight volumes since February 2017 under their Kadokawa Books imprint. A manga adaptation with art by Fujiazuki has been serialized online via Kadokawa Shoten's ComicWalker website since July 2017 and has been collected in seven tankōbon volumes. Both the light novel and manga have been licensed in North America by Seven Seas Entertainment. An anime television series adaptation by Diomedéa aired from April to June 2021. A second season has been announced.

The English text written on the title logo is different from "The power of the saint is all around." For the original novel and comic version, and "THE SAINT'S MAGIC POWER IS OMNI POTENT" for the anime version.

This work is serialized by Yuka Tachibana under the name of "Tachibana" to become a novelist from April 29, 2016  . On May 9th, 10 days after the publication started, it ranked first in the daily ranking of becoming a novelist, and on May 29th, one month later, it ranked first in the genre ranking at the same time for daily, weekly, and monthly. It became. As of June 2017, it has been read by 14,288,206 times (page views) and 3,684,023 people (unique access). On December 28, 2016, eight months after the publication started, the author Yuka Tachibana announced that it would be published as a book in February of the following year . The content of the book is "about 20% more than the serialization of becoming a novelist", and "the part cut off when writing the Web version is added", there is no general difference. Foretold. The first volume of the book was published by KADOKAWA Co. , Ltd. on February 10, 2017.

Tachibana started writing after seeing the award guide on the top page of Let's Become a Novelist, and found that "Saint" is included in the title for both men and women in the popularity ranking that I browsed for reference. I knew it and assembled the plot from there. The character in the work is set with the concept of "people who want to work in the same workplace". Therefore, most of the characters are favorable to the hero, and the only person who treats the hero coldly and becomes a trouble maker (Prince Kyle) is also due to negligence and belief that there is no malicious intent, and it can be said that it is characteristic that no bad guys appear at all. Regarding the treatment of Prince Kyle, in the postscript of the author of the second volume of the book, the reader's voice saying "Ira is sorry" that the original story concept was condemned and planned to be deported with the fake saint Islay. He said he changed his policy because there were many.

Sei, a 20 year old office worker was summoned to a different world after finishing some overtime work. But the person who had summoned her looked at her face and said, "This is not the Saint." Is this neglect play!?

Sei left the royal palace and concealed her saint title. She started working at a laboratory where she made potions and cosmetics. She used her magic to grant people’s requests and slowly people began suspecting that she was a saint…

Can Sei enjoy her slow dreamy different world life without her saint title being found out?!

The English release date for the digital version may be earlier.

On September 7, 2020, Kadokawa announced that the series would be receiving an anime adaptation. It was later revealed to be a television series animated by Diomedéa. The series is directed by Shōta Ihara, with Wataru Watari overseeing scripts, Masakazu Ishikawa designing the characters, Kenichi Kuroda composing the series' music, and Aira Yūki serving as music producer. The series aired from April 6 to June 22, 2021, on AT-X, Tokyo MX, MBS, and BS11. Yūki also performed the opening theme song, "Blessing", while NOW ON AIR performed the ending theme song, "Page for Tomorrow". Funimation licensed the series outside of Asia. Following Sony's acquisition of Crunchyroll, the series was moved to Crunchyroll. On July 13, 2021, Funimation started streaming their English dub of the anime. Muse Communication has licensed the series in South and Southeast Asia and is streaming it on their Muse Asia YouTube channel.

On March 9, 2022, it was announced that the series will be receiving a second season. The main staff members are returning to reprise their roles.

Sei Takanashi (小鳥遊 聖 / セイ, Takanashi Sei / Sei) is an office lady in her twenties who was summoned by the Saint Summoning Ritual. Her saintly powers enhance her abilities by fifty percent, due to her appearance she was not crowned as Saint. Accidentally making scenes with her research, she is on the verge of being found out as the saint. But after seeing her abilities she was finally been recognized as the Saint. She Likes to cook and make cosmetics in her spare time.

Sei has emotional maturity than many characters. She can be shocked or angry, but is still able to see the positive sides to her situation. She can act pragmatically even while remaining disgruntled. She also displays a sense of joyous wonder toward fantasy staples like magic and potions despite being summoned to another world. She also understands her situation wisely and tries to act calmly.

The moment Sei, an office lady in her twenties, got home from working overtime at the office, she was abruptly summoned to another world. Although Sei was summoned to be the Saint, the crown prince of the kingdom exited the room with Aira Misono only, the cute high school girl who had been summoned with Sei, leaving Sei behind.

Sei had no notion of how to return to Japan, so she soon decided to begin working at the palace's Research Institute of Medicinal Flora.

Although she realized that she was indeed the Saint, Sei concealed the truth in order to live her life as an ordinary person. However Sei displayed tremendous magical ability, astounding everyone with her skills in potion-making, cooking, and concocting cosmetics.

Starting from the day she used one of her high-grade HP potions to save Knight Commander Albert Hawke's life, Sei performed one miracle after another. In time, rumors in the place began to suggest that Sei Takanashi was the true Saint. Although she was summoned by the Royal Magi Assembly to be the Saint, Sei managed to avoid being outed for some time. She took up intensive magical training under the guidance of Grand Magus Yuri Drewes, and her days were busy yet fulfilling.

Perhaps as a result of her training, or perhaps because of another miracle with her gold-colored magic, it strengthened suspicions that she was the Saint. However, Crown Prince Kyle denounced those suspicious, stubbornly upholding Aira as the true Saint.

However, on a monster-slaying expedition, Sei once and for all proved her Sainthood. When Knight Commander Albert Hawke was in danger, Sei called on her golden magic to instantly cleanse the black miasma producing the monsters. As a result, Crown Prince Kyle was confined to his quarters for accusing Sei of being a false Saint. Furthermore, Aira, who had been isolated by Kyle once she arrived in the kingdom, was finally able to make friends at the academy, and with Sei. She, too, now strives for a peaceful life.

Sei displayed tremendous magical ability, astounding everyone with her skills in potion-making, cooking, and concocting cosmetics. 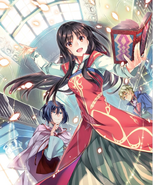 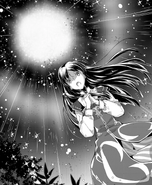 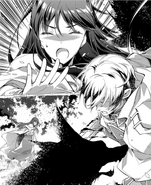 Reviewing episode 1 of the anime, the reviewers at Anime News Network gave the series a mixed reviews, averaging 3 stars out of 5, criticizing the generic setting and rushed pace of the first episode, while praising the quality of the animation, and the potential for story development. The reviewers also noted that while the main character did not get much opportunity for character development in the first episode, her design as an older women in her twenties, instead of the more common teenage boy, is interesting.