View source
This article have still need more information. You can help Isekai Wiki by expanding it.

After dying in a mountain climbing accident, a 28-year-old man finds that he is reincarnated in an alternate world… AS A POLAR BEAR. After taking a PAWS to get acquainted with his new body, the MC soon learns that he can fight better than aKUMA from Street Fighter after he BEARs witness to a beast girl being hunted by the army and gets ARCTICked off.

The question is: is this new life a blessing, or a curse?

The Guardian God of the Forest

Kumakichi Kumada should have slipped into a valley while climbing his favorite mountain, but when he noticed, he became a polar bear and woke up in the deep forest of another world. Protecting the werewolf sisters who were chased by the human race and fled to the forest, he made full use of his tough polar bear's body and the knowledge of survival that he had in his previous life to make life in the dangerous forest more comfortable, I will do it.

You want more Explanation what he is capable of, details here. 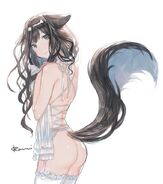