Makenshi no Maken ni Yoru Maken no Tame no Harem Life (魔剣師の魔剣による魔剣のためのハーレムライフ, The Cursed Sword Master’S Harem Life: By The Sword, For The Sword, Cursed Sword Master / The Habitual Swordsman's Cursed Sword Have Become Magical Swords Leading to Harem Life) is a Japanese Web novel to light novel series written by Fuku(ryuu), and Illustrate by POKImari & Nakaichi. The light novel series was adapted into a manga series with illustrations by Kojima, Saya and serialized by Web Comic Gamma Plus with 4+ volumes released as of March 25, 2019.

"This is the story of Souji and Hotarumaru's journey through a new world as he seeks to achieve... a sword harem?"

A normal high school student, Souji Fujinomiya, was stabbed by a robber who attacked his home one night and ended his short life. However, Souji Wolf decides to move to a different world with the large sword "Firefly Maru" who speaks by the existence of "God" and the small sword "Sakura" who took his own life.

In the immigrated world, Souji Wolf gets a job called " Magic Swordsman" who can raise weapons and anthropomorphize . Along with the beautiful girl Sistina who met in a different world, he will hunt monsters in a dungeon called "Tower" that is crowded in this world and earn a living. !!!!

An ever-righteous sword-lover was your ordinary high schooler, Fujinomiya Soujirou. On a certain evening, he had his life cut short when he was stabbed by a robber in his home. However, in the mysterious space Soujirou appeared in afterwards, there was a certain being that introduced itself as a [God] of a world. This [God] asked if Soujirou was interested in living a bit longer.

At that moment, together with his beloved katana, Soujirou consented to living in another world. However, when it concerned getting the cheat ability commonly bestowed by an otherworld God– he was simply told, “there aren’t any cheats.” Sent to the other world, he was able to bring with him the talking sword, [Hotarumaru/Little Firefly], and the sword that took his life, [Sakura]. In addition, the only thing the [God] chose to bestow him was a button down shirt and parachute pants.

Soujirou with his beloved swords in another world were able to meet with a beautiful girl named Sistina, who held the unique job of [Acolyte] a type of combat priest-maid. He aims to raise a harem of katanas, while hunting monsters for his daily necessities.

Though Soujirou fights, he also enjoys having a relaxing time building an onsen, capitalizing on creating new items taken from the vast knowledge of Earth’s many light novels, starting up a new organization, and daring to try developing new and convenient items. Being taught myriads of things by his swords, Soujirou, an otherworldly traveler without a cheat ability, learns about his own power gradually through fighting.

Doing nothing. Looking forward to the time when that life is possible. Setting that goal, interacting with the townspeople and going to the tower. Though he tries to live normally while fighting, he gets dragged into problem after problem, or ends up doing bandit subjugation and getting involved with a troublesome self-proclaimed rival. Even with all that, he seems to enjoy living his newfound everyday life in the other world.

Soujirou, swordsmanship skills are pretty fair compare to Hotarumaru skill in handling swords. By he always "feels" the optimal flow for himself during battle. Him honed sixth sense is almost precognition. The accuracy of this instinct can be augmented by experience. However, having good hunches is not so good... he acutely picks up the worries of everyone she meets, so he ends up helping each and every person he comes across.

In His past life, he was scheduled himself to wake up at 4 o’clock in the morning to swing my katana without reservation, and then, it became a daily routine to continue swinging the katana uneventfully for about two hours before the maids started their activities before he transported.

Soujirou given a simple skill by the God "Well, to be able to comprehend the language alone is something I have to be thankful for. Furthermore, if it’s just up to the point of being able to read and write, then I should be able to manage somehow. I mean, these kinds of special abilities for this different world seem to be the most basic of all.''

He is currently training for two swords with his basic physical strength due to the difference in the environment, and according to his teacher, Firefly, he seems to have the ability of "two steps before the master". The Summon a magic sword skill it only 1 sword per summoned, this entry only will get when he killed a boss in the dungeon. 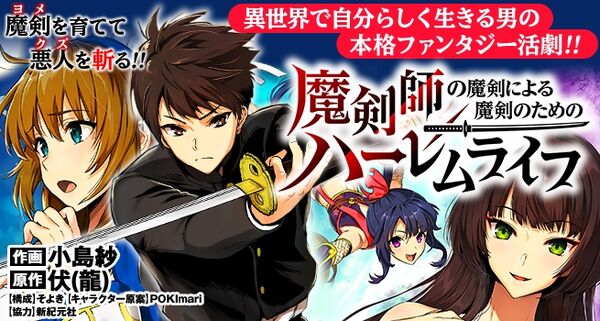