View source
watch 01:36
We're Getting Mutants in the MCU - The Loop
Do you like this video?
Play Sound

Dungeon Seeker (ダンジョンシーカー, Danjonshīkā) is a Japanese light novel series written by Sakamoto 666 and illustrated by Gia and is based on the web novels of the same name. The series began publication and publishing imprint on May 19, 2016 by AlphaPolis Web Manga.

Junpei Takeda, a high school student, is childhood friends with Noriko Tatsumiya and the bully Kido Shouta. One day, during the usual course of bullying Junpei, they were suddenly summoned to a different world by the whim of "God." Summoned Heroes with cheats, or so he thought. But it turns out Junpei's stats were even worse than an average farmer. Tricked into a deathly labyrinth by the only one he trust, he walks the journey for revenge.

Single (Never Trusted of Human Being)

"I could care less about world peace.
I'll continue to dwell in this villainous world, it's kill or be killed.
" ― Takeda Junpei

Takeda Junpei a.k.a Junpei is the main protagonist of Dungeon Seeker. He lives his days being bullied by Shouta Kido and saved by his childhood friend Tatsumiya Noriko. But one day, they’re all summoned by “God”, who cruelly claims that he’s going to relieve his boredom by sending them to a dangerous world of fantasy. In the end of the manga, after removing the miasma of despair the main source of power for the dungeon boss , Sakaguchi Nazuna defeats it and they both are able to ask the dungeon to fulfill one of their wishes ;Junpei wishes to revive Rakuki Mia but the dungeon refuses since it defies the engraved fate so he wishes for 'Gossan' and his family to reach the outside safely; the dungeon also transports him to his original world along with the 'old man who left messages in the dungeon' ;The story finishes by revealing that Junpei retained his skills and status is working in killing all the evil and filth from the world. 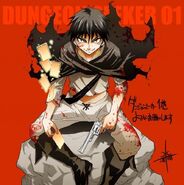 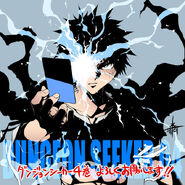